Radiolab’s Live show “In The Dark” makes. me. so. happy. At the end of last night’s show, I declared that if Jad (Abumrad) and Robert (Krulwich) just sat down and taught me a show about everything important about science, I’d be a genius. They are the Bill Nye the Science Guy for curious adults. After all, Radiolab is “a show about curiosity.”

First things first, let’s start here: Radiolab is “a show about curiosity. Where sound illuminates ideas, and the boundaries blur between science, philosophy, and human experience.” The boys performed their live show “In The Dark” at BAM last night, co-hosted by Demitri Martin, with whom I was previously unfamiliar, because I (apparently) live in a cave. He was hilarious, as (apparently) is to be expected, and was actually far funnier when he was improvising/making fun of the audience than when he took us through his scripted bits/slide shows. One of my favorite parts was a quick round of Good/Bad/Interesting, which (apparently) he’s played before.

EDITORS NOTE: It’s really tough for me to tell you about these things, because I really want you to experience them. This is why I don’t just show you pictures of our weekend at the beach. I don’t want to show you pictures. I want you to come. I want those hair curls you repress to swell with ocean salt and your hands to be all sticky clammy from cracking lobsters and sand to fall out of your pockets when you return to Manhattan and drop them on your parquet floor. So keep that in mind, lobster hands, and, just this once, mainly because the two New York shows are sold out, I’ll tell you a bit about what we saw. But you have to promise to listen to the podcast when it’s posted (and I’ll post it for you). 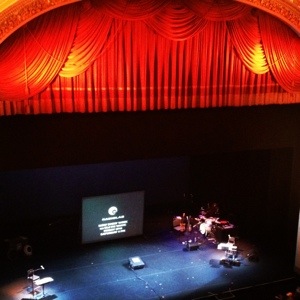 Part 1: Jad and Robert began by taking us through the evolution of the eye, a controversial subject of Darwinian debate, and for this they summoned (one of my faves) Carl Zimmer, who took us through eyes as light detecting blobs to the modern day ones we know and love, that are embedded in our skulls (really neat, I didn’t know either, check it out). At this point in the show, the evolution of the eyeball is being beautifully exhibited by choreographed by modern dance troupe Pilobolus (brooklyn natives!) — who pretty consistently, fluidly, entertainingly accompanied (without distracting from) the show whether dressed as giant glow in the dark eyeballs or stripped down to their skivvies.

Part II: Next, we met two blind men from opposite ends of the world, one of whom tries to wipe his memory of all images so as not to skew his ability to live in the moment, and to live “truthfully” (as opposed to thinking of his wife the way she looked in her youth, he prefers to have no visual, mental picture at all) and the other, who strives to remember and envision as much as humanly possible, to the point where he intimately knows the cheek creases of his wife’s laughter and is comfortable crawling around on his roof to fix a leak. This dichotomy, and difference in perspectives was poignant and thought provoking. The gents provoked the audience to think of whether our full impressions of people are rooted in visual expressions, in images… whether our emotional attachments are cemented by seeing/understanding each others’ “isms,” reactions… I’m still thinking about it now.

Part III: SPACE! Of course I wasn’t at all excited to be introduced by phone to NASA astronaut Dave Wolf (did you know NASA’s hold music is actually sci-fi-ish space sounds? me neither. *SWOON*) who told us about the last 30 seconds of his life (or so he thought) when he was “locked out” of an airlock, for hours, in deep space, and had to disconnect his “umbilical cord” (co2 filter/cooling system) in a last ditch effort/affording a 4 minute window to break back into the pod and save his life.

Here’s where my heart breaks because you weren’t in the theater. They also gave us all these little light-conductory contraptions, so at the end of the show we were able to sort of “give a present” back to Jad and Robert by making the audience look like a glittery night sky, with a giant sun projected on the stage (pictured above). Of note that Jad and Robert sang the praises of stage band Thao Nguyen (who also boasted an earlier solo performance) thanked the audience, took a bow, Demitri Martin came back out in a dorky red backpack, and all was right in the world.

My final plea is twofold:

1) If you don’t already listen to Radiolab, start. They even have an iphone app now to make it super easy.

2) If you don’t already (listen and) donate to NPR, start. It is one of the most enriching, important private institutions we have.

Lizzie is a writer, communications professional, science nerd, fitness enthusiast, and lover of all things candid. View all posts by allthingscandid