One of the most beautiful things about living in New York is the close proximity of diverse strangers… for any the people-watchers among us, it’s always fun to imagine someone’s “story” as they pass by you in the street. The Moth, I found, was a poignant reminder and perfect exhibition of these people-stories.

On Tuesday night I attended a Moth “slam” at HousingWorks Bookstore and Cafe in SoHo, NYC. In recruiting friends to attend my first ‘slam,’ I found that most either friends either a) got super excited/defensive “You’ve never been before?! How is this possible? I love the Moth!” to b) very confused “Is it a movie? Is it comedy? Is it real?” The best five-second-summary I can give you is to say that it is a series of 5 minute “improv stories” from members of the audience/people like us.

Here’s how it works:

-Each “slam” has a theme (Tuesday’s was “chemistry”) and when you arrive, if you have a story you’d like to tell, you are welcome to drop your name in a hat.

-Doors opened at 7pm (which was really more like 7:30) and the line was already down the block by the time I arrived at 6pm. It sold out, and many people were standing, So get there early.

-A host (ours was the funny/spunky Ophira Eisenberg, host of NPR’s ” Ask Me Another”) warms up the crowd and introduces each of the 10 storytellers (whose names are pulled from a hat).

-After each speaker, 3 panels of judges vote (scores are on a generous 7-10 scale) to ultimately decide the winner and “best story” of the evening.

-Between speakers, the host (in this case, Ophira, pictured above) makes jokes and reads from little q&a notecards the audience filled out while waiting for the slam to begin. Our notecard question read: Like oil and water, what two things in your life just don’t mix?” Funny responses included things like “Man Sandals” and “My husband and my boyfriend.” …Eep.

All in all, the moth is kind of a fun club of (I’m just gonna say it though I love you guys) nerdy curious people. In line and in the audience I met a slew of really interesting and diverse people who were either avid listeners or at their first event, from doctors to marketers to college students.

The speakers themselves ran the gamut:

-An articulately endearing prep schooler (who immediately alienated his hipster-y audience by declaring his allegiance to his prep school, Choate Rosemary Hall, expecting a warm reception/meeting crickets… I feel you bro) but eventually won them over with his tale of excruciating wrestling injury and anesthetic resistance (did you know about redheads and the MC1R gene? Me either.)

-A charming hipster who recalled re-introducing herself to people over and over, without being able to remember faces (haven’t we all been there?) only realizing after years of embarrassment, and listening to an episode of radiolab, that she had formal prosopagnosia, or “faceblindness.”

-An actual (immensely charming) staff member of the Moth who told his story about working as a weld inspector amidst oil spills in the gulf, whose life and professional awakening was eventually prompted by a silent brotherly understanding with a lost shark.

The moral of the moth, for me, is that people are fascinating, and fascinating people go to the moth. If you’ve found yourself doing a bit too much introverted ipod walking on the subway lately, for only $8, you too can be re-enchanted by humankind. Peep the schedule here. And let me know if you go, ’cause I’ll be there too.

I’ve been a huge fan of Lawrence Krauss since seeing him earlier this year at AMNH, where he was promoting his newest book, “A Universe from Nothing.” In it, Krauss, a theoretical phyisicist (which is what I decided I’d love to be, if I could do math) essentially assuaged my emerging-athiest philosophical doubts about how the universe could have possibly come into existence without the help of a capital H-i-m. 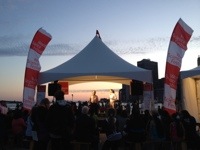 (Above, Krauss on stage at Brooklyn Bridge Park)

Needless to say, I was psyched to learn about the World Science Festival this week and bummed that most of the lectures were sold out, but relieved that there would still be a chance to hear Krauss speak at Brooklyn Bridge Park at sunset on Saturday (see above). Not to mention live music and stargazing through telescopes pointed at the Moon and Saturn (which looks just like cartoon Saturn through a telescope, by the way). The basis of his brief chat this time was the upcoming transit of Venus and its importance for astronomy, and mankind— specifically the search for prospective life on other planets. Kind of important.

I’ll be watching the transit of Venus at AMNH on Tuesday. It’s not happening again for 105 years. Will you watch?

Also, find out how you can still catch more of the World Science Festival on 6/3.

On Wednesday night I had the pleasure of attending a panel about finding and sharing inspiration online hosted by Austin Kleon, of “Steal Like an Artist” and “Newspaper Blackout” notoriety. Panelists included Maria Popova, of Brainpickings, Maris Kriezman of Slaughterhouse90210 and Maud Newton of, well, Maud Newton.

Newton (whose blog credits include the Times, Forbes, New York Mag, WSJ and all other noteworthy publications you might imagine) describes Popova and Kriezman as her “internet crushes” which I was relieved to learn, as Popova is one of my intellectual-online-muse/idols (I sat in the audience near her during the #smwscience panel at AMNH, which included personal favorite science guy Carl Zimmer (among others), and briefly felt like I was in the audience at the academy awards).

If you haven’t checked out Popova’s blog, Brainpickings, start now. It is aptly described as “a human-powered discovery engine for interestingness, culling and curating cross-disciplinary curiosity-quenchers, and separating the signal from the noise to bring you things you didn’t know you were interested in until you are” …which has become the story of my life over the past year in New York.

I’ve found myself, like Popova, falling in love with honesty all over New York in the form of Culture, Art and Photography, Science, Health and Fitness and Coincidence, and am excited to share it with you here.

Throughout the panel these women at the forefront of stimulating digital conversation echoed this sentiment: Our online selves are extensions of our real selves— a digital call to arms!

Welcome to All Things Candid.